Playtime in My Generation 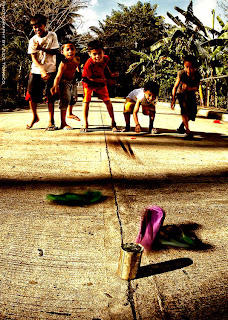 
When I was a little girl, I often stayed outside to play with my brothers, my cousin and the neighbors - except my older sister who liked to stay indoors. We had our hands on anything that looked interesting: dead insects, broken things and weird plants. Our favorite afternoon game was “Bato Lata” or in Tagalog, “Tumbang Preso”. Nothing felt more glorious than making the tin can fly as far as possible by hitting it with our flip flops so we could make it to home base (works like Baseball). Those were our first tastes of victory – and they were very physical. At times, we hit each other's face, bumped each other’s head, stepped on others’ toes or elbowed each other’s nose. I learned a hard lesson about cheating through this game when my leg hit a log while trying to run outside of the game area. The injury was quite bad that I was brought to the hospital to have a minor operation.

But injuries didn't stop me from playing hard, especially when it’s an exciting game like “Chinese Garter”. The goal is to jump over the garter as it is held higher as the player levels up. Being able to buy two pieces of “Chinese Garter”, instead of one, was always a dream come true for me. The sight of them in a box at the store outside my school made my heart tickle and motivated me to save money. I often played this game with my older sister and some of her classmates even though I often found it unfair for big girls to be playing against small ones. But when you have no choice and you badly want to play, size will not matter. This is one of the games that built my little dreams, my little victories and my desires to win. My scars will always tell those stories.

Some of my childhood mishaps left no evidence though. One was when I fell into a fishpond. My aunt’s house which was just a few blocks away from home had this famous fishpond that many of us kids often visited to catch some small fish with our hands. In my obsessive desire to do so, I leaned over too much that I fell into the pond.  It was just a small one– about 3 square feet and the water was shallow, I couldn't have drowned but the fall caused a commotion to the entire household. One had to be told to make me some hot chocolate milk, another to get a towel and another to tell my mom about it. I was instantly taken out of the water with weeds all over my head and was brought inside to have some hot chocolate milk.

In my generation, we were spending 95 % of our playtime outdoors and just 5 % with computer games. The 5 % had to be further divided among my three siblings and my cousin, Flor. We would sometimes fight to get a turn and tried hard to make Mario or Luigi stay alive so we wouldn’t be replaced. To help us decide who should go first, my father would make each of us pick a toothpick. Whoever got the longest one got to play first, followed by the second longest and so on.

The 95 % was spent on games that were at times risky - we played on the street and had to stay alert for vehicles passing. Our games were surely dirty – mud and dust would get mixed with our sweat and be all over our shirt. Our games were sometimes painful - would break our bones, cut our knees and bruise our arm. We were often hungry and thirsty but there was nothing like going home to a glass of ice cold water and fried bananas.

Even despite all these scars on my legs, I wouldn't trade my childhood for anything else. Though my playmates and I fought all the time, I wouldn't have it any other way. I likewise don't wish we had been richer so I could buy all the Chinese garter I wanted. Yes, we often had to make do with what we found: old junk stuff at the backyard and some mud and there were many things we could only dream about as kids: large doll houses, tree houses, bicycles, remote controlled helicopters, scooters and the list went on. We didn’t tap or click to be entertained. We didn’t need an ipad or an internet connection to be happy. We connected by simply being together. We simply had our physical selves, some guts, some dreams, and if I may add, some cans and flip flops– to have loads of fun.